It’s a staple of spy and adventure novels and films. At the end of Goldfinger (1964, dir. Guy Hamilton), James Bond is handcuffed to an atomic bomb in Fort Knox. After managing to free himself, he frantically starts to pull some wires on the device when a scientist arrives, flips a toggle and halts the threat with 007 seconds to go.

Things don’t end so well in the darkly comic, Dr. Strangelove: Or, How I learned to Stop Worrying and Love the Bomb (1964, Stanley Kubrick). After a mad US general manages to direct nuclear armed B-52s on a mission to bomb Russia, US President Muffley calls Soviet Premier Kissov with advice on how to shoot down the planes. However, a single plane makes it through Soviet air defenses and drops its weapons, setting off a “Doomsday Machine,” timed to go off automatically in case of attack. The movie ends with a montage of actual atomic bomb detonations (mostly US tests on Pacific Islands) and the English vocalist Vera Lynn singing “We’ll Meet Again.” AfterStrangelove, faith in a winnable nuclear war, fallout shelters, and MAD, or Mutually Assured Destruction (the Cold War doctrine of deterrence), all took nose dives. 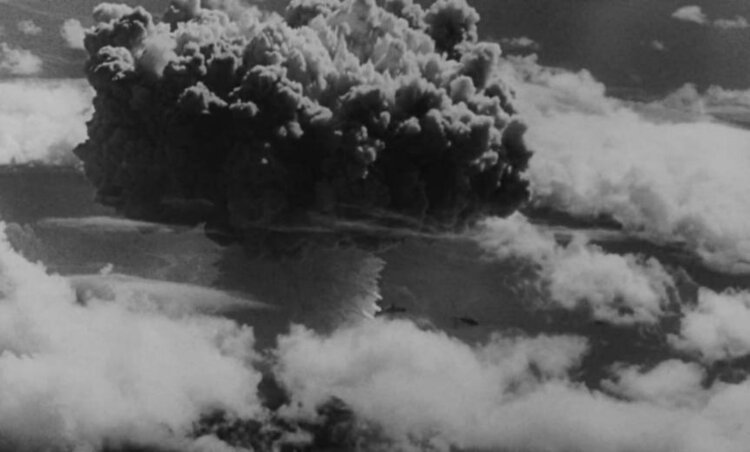 There have been a few movies in which climate change is the ticking time bomb, including The Day After Tomorrow, (2004, dir. Roland Emmerich), Snowpiercer, (2013, dir. Bong Joon-ho) and the documentary An Inconvenient Truth (2006, dir. Davis Guggenheim). They all did pretty well at the box office too, but unlike Strangelove, appear to have had limited impact on politics or public perception. The issue of climate change was all but invisible during the last presidential election, and President Trump is proceeding to undo the already inadequate initiatives undertaken by President Obama. While Trump hasn’t yet renounced the international climate accords agreed in Paris in 2015, he has: 1) Ordered reviews of automobile efficiency standards, offshore oil drilling policies, and Obama’s Clean Power Plan; 2) Put climate change skeptics in charge of the departments of Environmental Protection, Energy and Interior; 3) Pledged to dramatically slash the EPA budget; 4) Approved the Dakota Access and Keystone XL pipelines, allowing more oil and gas to be pulled from the ground and burned; and 5) Gutted rules to prevent methane leaks at gas drilling sites, methane being among the most potent greenhouse gasses. (That rule change was just vetoed by congress, but it may come back.) So the big question is: “Has Trump shortened the time on the climate “Doomsday Machine”? Is he Dr. Strangeweather? The brief answer is yes:

According to NASA and NOAA, 2016 was the hottest year since global recording keeping began in 1880. It was the third year in a row to set a record. Sixteen of the 17 warmest years have occurred since 2001, and the earth’s temperature has already risen 2 degrees Fahrenheit in the last century, with most of the rise occurring in the last 35 years. Even if the Paris accords are implemented – and Trumps demurrals make that extremely unlikely – the world is still expected to warm by more than 6 degrees F. (3.4 C.) above pre-industrial levels by 2050 if not before, according to a recent paper by UN scientists (“Emissions Gap Report, November 2016”).  And remember, while six degrees may not sound like much, it’s actually a lot. During the last ice age (20,000 years ago), when Chicago and Boston were covered in a half-mile thick layer of ice, the temperature was only 5 degrees colder on average than it is today. Modest changes in mean temperature translate into dramatic changes in temperature variance.

The results of a planetary warming of 6 degrees or more would be Strangelovian. Rather than a gradual transition from one temperature regime to another, a warming of that size or greater, as Will Steffen and other climate scientists have shown, would be likely to push the global climate past a threshold or tipping-point, triggering sudden and possibly cataclysmic weather events. There will be long heat waves with frequent temperatures above 100+ degree in temperate climate zones, and 120+ degree days in arid, tropical or semi-tropical ones. For many regions, the coolest months in the late 21st Century will be warmer than the current warmest months.  Droughts will be frequent, especially in the Southern Hemisphere, forest fires more devastating everywhere, and crop yields in the warmest zones will decline by more than 50% leading to mass starvation. With a 6 degrees F. or more temperature increase, ocean levels will rise at least 6 feet by the end of the century, according to a study recently published in Nature, inundating coastal areas around the world including US cities New York, Boston, Washington, New Orleans and Miami. One bright spot: Mar-A-Lago will be submerged.

hat all this means is that additional measures, beyond those already agreed in Paris, must be quickly implemented if disaster is to be averted. Countries must resist building new infrastructure like coal-fired plants, oil pipelines, and offshore drilling rigs that will lock-in additional greenhouse gas emissions. More than that, they will need to shift to new, state-of-the-art green technologies, which means making massive investments in wind, solar, geothermal and other non-greenhouse gas emitting energy sources, as well as new distribution and storage technologies. And they will have to do all this while at the same time heavily taxing the fossil fuel corporations or else simply mandating that they leave in the ground trillions of dollars of future profits. It isn’t good enough to have both fossil and renewable fuels; the one must be replaced by the other.

Near the end of Kubick’s great movie, Strangelove, the ex-Nazi nuclear scientist played by Peter Sellers, recommends to President Muffley (also played by Peter Sellers) that he make plans to repopulate a post Doomsday planet from survivors pre-selected to live for some years in a deep mineshaft. He proposes a 10:1 female to male ratio in order to accomplish the job most quickly. General Buck Turgidson (played by George C. Scott) then asks: “Now, wouldn’t that necessitate the abandonment of the so-called monogamous sexual relationship, I mean, as far as men were concerned?” Strangelove replies: “Regrettably, yes. But it is, you know, a sacrifice required for the future of the human race. I hasten to add that since each man will be required to do prodigious… service along these lines, the women will have to be selected for their sexual characteristics which will have to be of a highly stimulating nature.”

At this very moment, President Donald Trump, EPA Secretary Scott Pruitt, Interior Secretary Ryan Zinke, and Energy Secretary Rick Perry may be huddled, Strangelove-style, in a secret, climate change War Room planning post-apocalyptic breeding programs even as they plot the slow and steady business of dismantling the Paris climate accords and raising the global temperature. But before we entirely despair, let’s remember the end of Goldfinger, when a government agent reaches out his finger to flip the switch that stops the bomb timer at 007.